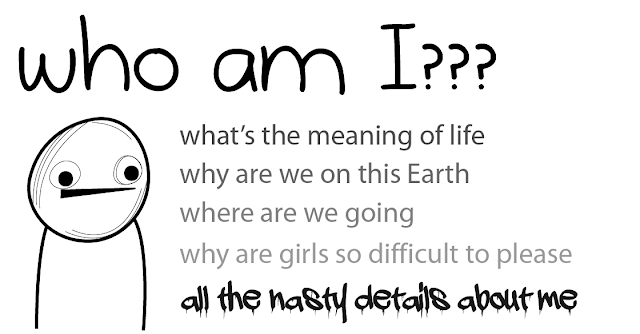 Hi there! Do you want to learn something about me? But… why?

Ok…
I like imagining crazy things, I enjoy watching movies and I think I can draw. I’ll keep the nasty details about my private life to my cartoons.

Let me start from the beginning

Hi there, welcome to my About page!
In order for me to tell you who I am and why I’m doing this (going on this crazy trip), I must start from the beginning.
Let’s go back in time and travel to the very beginning of things.

The year is 50,000 BC…. eerrrr, not that back in time!! Let’s just go back to when I was a little kid who loved drawing stuff, especially people’s faces.

I liked drawing a lot. My parents used to say I would become something related to drawing or designing like an architect or some kind of profession like that when I grew up. I remember I used to sketch all the time on my school notebooks too. And when it was time to draw during class my schoolmates said I drew well but I didn’t color my drawings all that well. 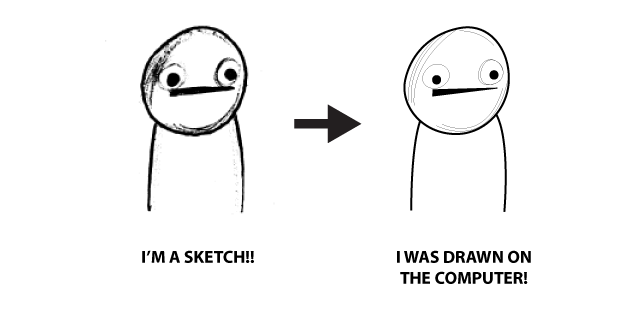 A few years later (during my teen stupidity years), on my Visual Education class my teacher said it was a pity since I could work and had a bit of a talent but I was lazy and rude all the time.

After realizing I was behaving bad and really being stupid, I decided to behave better but kept on being stupid in a different fashion. I even stopped drawing sketches on everything. My colleagues were amazed when they opened my books and notebooks and saw them perfectly clean, no underlining, no sketching, no nothing. (Since then I don’t draw on books anymore. I like them to be books not canvas to draw on. We must acknowledge the popular saying that goes: «books are our best friends, we must treat them well».)

Later on I grew up and found a new passion…

She was young, she was colorful and kind, she was mysterious, she got me all excited about what she had to show me, she was full of interesting things to do and to tell me, she was… the Internet.

Oh boy… what a treasure had I just found!! A big new playground to expand my creativity! A whole new dimension to explore.

I felt like the first sailors who went out to find the new world on never ever sailed seas (I’m talking about the brave Portuguese sailors and all the other countries and sailors who followed their example five centuries ago with no technology of any kind and huge balls inside their pants).

The first site I visited was the Altavista search engine, I think. I thought it worked like a robot who answered questions so my first query was ‘what’s my name’. I found lots of sites saying ‘my name is…’, ‘people call me…’ and so forth.

That was probably when a little sparkle went through my mind… WHAT IS THIS I’M SEEING? Regular people, not just big and rich companies have their own websites and pages? How is that possible?

And so I began my new-found quest. How do I create a website? What must I do to have my own website? One thing led to another and I started to learn HTML, CSS and later PHP, MySQL and… you get the point. I was creating and developing websites, and loving every minute of it.

I also learned what it took to have a successful website with some web marketing techniques and secrets. I went to college but my major was not Computer Science, I graduated in Marketing.

My work as a developer

The simple fact of reading «Hello World!» on a site that I developed and created was something magical to me. Many of the things I learned by myself, but I decided I needed more and I took some web developer and web designer courses.

Then I applied to work as a web developer and computer programmer and started working. But the times were crazy and some days I was working and some other times I was unemployed.

So I decided to create new websites of my own to showcase in my portfolio and keep learning and improving my skills as a developer.

I planned, coded, developed and built a brand new website from scratch. I wrote thousands and thousands of lines of code and I designed the logo, images and layout of it. I even decided to add some content in it to make it alive. And I thought I could maybe even earn some money while I was doing it.

But please, Louise… my computer was really, really sloowwww!!! I really had to wait a couple of minutes to open my programs and while I was at it I usually had a pen in my hand and a piece of paper laying around and so… I went back to sketching. Today… I say thank you, computer! for being so slow! I really do!

I was looking for a new way to make money and on a summer holiday my cousin showed up wearing a very cool t-shirt with a distorted brand logo stamped on it. A well-known logo changed in a funny way. I said ‘hey, that’s so cool. Where did you buy it? How much was that?’. He told me, and I was like… ‘wait a minute, I could open a store like that and sell funny shirts’. ‘I need money too, let me help you with that!’, replied my smart cousin.

A few days later, we decided to create a funny shirt online store with our own design shirts and funny characters and stuff. ‘Oh yeah?! Where do you think we’re going to find someone to draw that for us for a low price, dude?!’, my cousin asked me.

‘I’ll draw them myself, my dearest and foremost cousin!’ and he happened to notice one of my sketches laying around and said ‘wow, you drew this, man? It’s so cool!!’.

But we had to be smart about the business. To increase our chances of selling those cartoon shirts we had to make those characters famous, or at least, known. I decided to go back to drawing and created a new section on that site I had developed featuring my cartoons and comics.

I drew some and I even created the ‘Adulterated Posts’ series but I was aiming for the wrong audience.

What influenced (still does!) me

This coming back to drawing, creating characters, cartoons and comics got me really excited about it. (It felt good and brought me back to those old childhood feelings of playing, imagining and drawing.)

A while back I had found this incredible cartoonist that goes by the name of ‘The Oatmeal’ and I can say he influenced my decision of drawing and opening that funny shirt online store deeply. His drawings are so crazy and so awesome that one’s mouth gets watered with desire of drawing something like that.

But everyone must have his / her own style. Being influenced by someone does not mean copying that someone’s work! I’m still looking for my best approach and style but I can say I’m getting closer by the day.

Other guys who influenced me reading their life’s work are Walt Disney and A. A. Milne, the creator of Winnie the Pooh (and also Matt Groening from ‘The Simpsons’ and even more guys).

I was mad about Donald Duck and Uncle Scrooge comics when I was younger. My mom still says that my greatest financial advisor has always been Uncle Scrooge himself with his never ending stories on saving money and preventing from being stolen by the Beagle Boys.

Everyone is well aware about the unbelievable and magical environment that Walt Disney built that has touched generations and generations of people all over the World.

The same goes to A. A. Milne. Who thought that creating a book about his son’s toys would become something that millions of people would read and know?

That’s my goal. To create an everlasting work, something that lives on for ages. Something nice to make the world a happier and funnier place.

I created this website to show you and everyone reading this my trip from a programmer to becoming a cartoonist and comic book writer. I’ll try to draw cartoons and comics, create more of those ‘Adulterated Posts’ and present them to the right audience which is, hopefully, you.

I will also be keeping you posted on my improvements as a cartoonist on the site’s blog section. I’ll try to research, curate and learn the best information I can find on what it takes to become a successful comic book writer and I’ll share that with you.

This site will also be used to held me accountable and I’ll be somewhat pressured to keep on drawing and writing comics. I’m curious about it, aren’t you? Let’s see what happens!

Why redhotmustang and what’s my name

Redhotmustang is just a nickname I picked and have used for many years. In my early years of the Internet people used nicknames more than they used their real names to register themselves in forums, create email accounts and stuff like that.

I needed to pick one up so I mixed some of my favorite things: red (my favorite soccer team shirt color) + hot (from my other nickname that is the exact opposite of Zero Cool from the movie Hackers — yeah way back!) + mustang (the famous horse breed because they are strong and tough). Joined together those three words sounded amazing and that’s the reason.

Finally, I do have to answer to the very query I typed in the Altavista search field. My name is Louie Luc (I’m going to be a cartoonist and comic book writer) and I’m glad you’ve read so far. I hope you have learned more about me and what it took me to get to this place and endeavor.

Your friend in time, (even more way back in time… 😀 )
Louie Luc a.k.a redhotmustang.
P.S.: Yeap, you guessed it! I just love the Back To The Future trilogy.